- A committee was formed by the Hague-Thomas-Hegarty Post 130 of the American Legion to investigate the possibility of Constructing a Veterans Memorial Building in Grass Valley.

- The Nevada County Board of Supervisors approved a Veterans Tax District for the purpose of building a memorial building.

- At this time - $2,300 and $2,800 borrowed from the County the Rodda lot property closed escrow. Over the next 2 years the County was repaid the borrowed money. 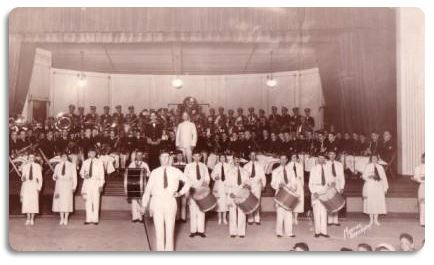 - Ground breaking day for the new building. This Veterans Building was planned and completed before President Roosevelt’s Work Projects Administration program began. Materials used were 250,000 board feet of lumber, 4,500 sacks of cement, 45 tons of steel, and 800 cubic yards of concrete.

- The grand opening was held by Post 130 and the American Legion Auxiliary. The Grass Valley Concert Band and American Legion Drum and Bugle Corps were part of the opening festivities. 750 couples were on the dance floor and about 500 additional people in the stands. More than 300 were served at the midnight supper handled by volunteers from the Ladies’ Auxiliary.

- A formal dedication was held. It started with the drum and Bugle Corps from Post 130 marching from the Elks Building to the Veterans Building. There were speeches, band music, a solo, and a memorial pageant. In the evening Grass Valley and Nevada City churches held community services.

- The building committee passed plans to construct a downstairs kitchen, dining hall, clubroom and bowling alley. At this time the kitchen was upstairs as well as sleeping quarters for the custodian.

- The renovation of the lower floor was complete. The basement area was excavated with picks, buckets, wheelbarrows, and shovels.

- Until the 1960s the American Legion handled the management and operations of the building. After that point the building operation was turned over to the County of Nevada.

- May 17, 2008 - The renovated building was rededicated to the Veterans of Nevada County.Utilizing the Work Force Housing Grant along with Proposition 12 and Quimby funds, major renovations included painting of interior and exterior, new flooring in the Dining Hall, lighting, carpeting in the foyer, ADA compliant upgrades, replacement of stage curtains, hardwood floor refinish and new basketball hoops and volleyball poles and net.

- A ribbon cutting ceremony to celebrate the retrofitting of stadium seating took place during the Veterans Day Celebration. The Center for the Arts in conjunction with Nevada County and the Nevada County Consolidated Veterans Council, managed a fundraising campaign to install 483 stadium seats with backs and cushions. Each seat includes a plaque dedicated to a veteran , active duty personnel or a veteran’s organization.

This stately building continues to serve well the veterans who have answered the call of the United States military in defense of our Country.