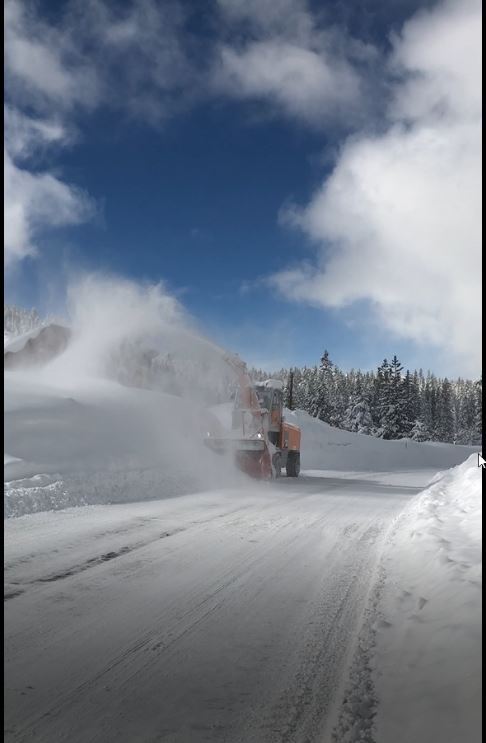 Nevada County maintains approximately 562 miles of roadways. The elevation of the County ranges from 1,000 feet above sea level to over 7,000 feet. About 245 miles of these roads fall within expected “normal” snowfall areas on both sides of the Sierra Crest. This area generally lies at the 2,500-foot level and above. Our snow routes, crews, and equipment are designed to work in this area. When the snow level drops below this level, snow removal becomes challenging and residents living here may not see the same level of service as performed in higher elevations. Snowfall amounts in the “normal” snowfall areas range from less than 100 inches to over 500 inches annually depending on location and elevation. The terrain in these areas is often very steep with many curves offering a variety of challenges to driving as well as to snow removal and ice control operations.

It is the goal of Nevada County to plow these roads often enough to keep them passable to traffic and as free of snow and ice as possible.  To do this, it is often necessary for the County to become a 7-day-a-week, 24-hour-a-day operation during storms and throughout the cleanup stages following the storms.  In order to cover the many miles of roads in the most efficient and timely manner, it is necessary to remove the snow in a way that minimizes time-consuming tasks.  Certain patterns and techniques have been proven over time to help efficiency.  The purpose of using these methods is to get the job done in a way that provides the best overall benefit to most people.

1. Why do I always get a snow berm in my driveway every time the road is plowed and why can’t the road be plowed so I don’t get one?

2. Why can’t they just turn their blade when they go by my driveway?  It would only take a minute?
Answer:  While a minute doesn’t seem very long, multiplied by several hundred driveways, it adds up to a substantial amount of time by the end of the day that could be spent plowing the roads.

3. Who is responsible for clearing snow from my mailbox?

Answer: Homeowners are responsible to ensure their mail service is continued.  Plow operators will help by plowing as close to the mailboxes as practical without causing damage to the boxes.  For this reason, mailboxes should either be maintained at a level to withstand normal plowing operations (installed at the proper depth, replacing rotted posts, etc.) or made to be moved and replaced when required.

4. Why doesn’t Nevada County use some type of snow gates?

Answer:  Snowgates are used by some agencies on their grader blades and they can work well in areas with flatter terrain and lower snowfall amounts.  Problems arise in areas with heavy snowfall and steep terrain or areas where long parking pads or multiple driveways do not allow the snow to be discharged from the blades for long distances.  In these cases, snow can build up to the point of actually stopping the grader or leaving snow in the traveled way.  In addition, gates are only installed on the grader blade and not the plow blade so snow is still discharged off the plow.  Limited benefit, lower efficiency, and higher costs have all factored into the decision not to use them at this time.

5. Why does the plow sometimes go by more than once?

Answer:  Some roads may be too wide to cover in one pass.  Also, when removing packed snow and ice from the roadway it may require several passes to remove it.

6. Why does it seem that I get a big berm in my driveway while my neighbors get little or no berm in theirs?

Answer:  We try not to give one person more snow than another.  Near intersections or cul de sacs, the amounts may not be equal due to the way that these areas must be plowed.  The County tries to minimize these impacts when we can.  It may also be possible that your neighbor removed his berm.

7. Since the Rotary Blowers blow the snow away and don’t leave berms, why doesn’t the County just use blowers for all their snow removal?
Answer:  Blowers don’t remove the snow all the way down to the pavement thus causing an ice problem for motorists and they move much slower than a push plow.

8. Why don’t the blowers follow behind the plows more closely so they could remove the berms right away?

Answer:  Blowing snow is a much slower and expensive operation than plowing.  The County waits until there is enough snow on the sides of the road to warrant blowing before using the rotary plows to widen the streets.  It could be anywhere from a few hours to several days before your street is blown depending on conditions.

9. After the blower goes by, why do I get another berm in my driveway?
Answer:  The rotary plow does not clean all the way to the pavement and it may also leave some large chunks of snow behind.  It is desirable to remove as much of this as possible so that it doesn’t freeze and cause ice or other traffic hazards.  Typically a grader follows the blowers to remove as much of this as possible.
10. Why does the blower blow snow into my yard, sometimes on my trees, propane tank, cable TV line, etc.?

Answer:  The County tries to blow the snow back as far as is practical to allow for storage later in the winter and to allow us to see your homes and driveways better.  In many areas, the County has a snow storage easement that is utilized as much as possible.  With several thousand houses in the Nevada City area, it becomes nearly impossible to keep track of everything in every yard.  Marking some of these things could help us to avoid them, but keeping them out of the snow storage area would be best.

11. Sometimes snow gets blown into my driveway or parking area.  Why does this happen and how can it be prevented?

Answer:  The County tries not to blow snow in driveways or parking areas.  Occasionally the operators do not see them or miscalculate the distance to them.  This is especially true of circle-type, angled driveways, or parking areas hidden by high berms or banks.  You can help minimize risks by marking your driveway with a small sign.  If snow is blown into your driveway, you may want to notify the County or the operator.  Although we may not be able to remove it, we may be able to make note of it for future operations.

12. Are streets plowed on a regular time schedule?
Answer:  Weather conditions, the timing of storms, and a number of other things all factor into when streets get plowed. We try to plow each street at least once every 12 to 24 hours.

Other Useful Information and Tips

Winter Preparedness is Key to Living in Snow Country